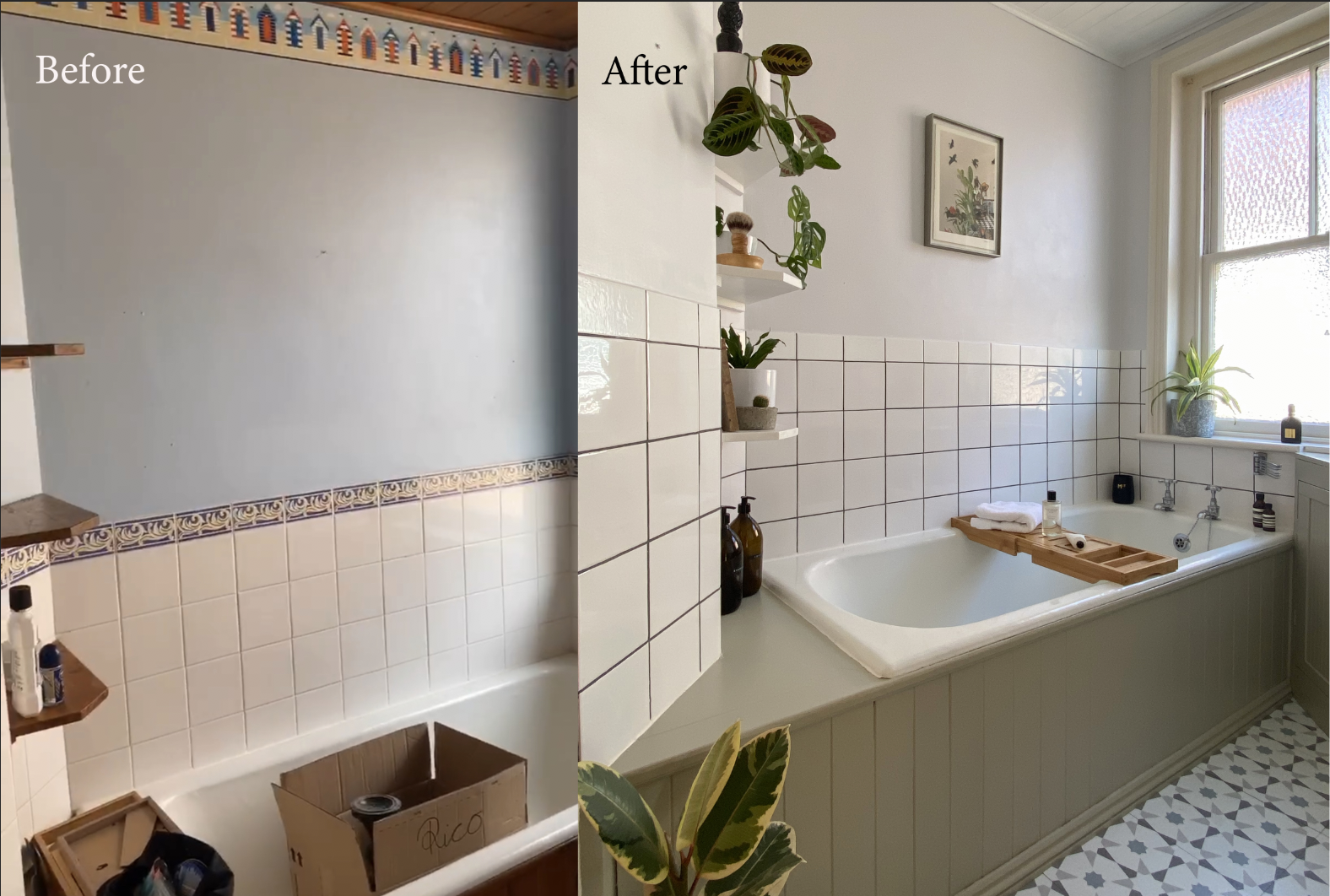 If you’re looking to update a tired old bathroom, quickly and on a budget, this is the blog for you!

When we moved into the new house, the intention was to do some quick temporary fixes to make the house liveable while we waited for our planning approval. There were two rooms in particular I wanted to focus on, the bathroom and the kitchen. Both rooms were dark, felt grubby and featured loud, mis-matched décor that I doubt had been updated since the 90s.

Within just a couple of days of moving in, I set to work. The bathroom was the easier of the two rooms to tackle, primarily because it’s one of the smallest rooms in the house.

The inherited décor was pretty diabolical. The bath panel and surround, sink unit and overhead cupboard and the whole ceiling was clad in dark orange-stained pine. The floor was covered in old cork tiles and the walls were painted blue with a colourful beach hut border. To add to the scheme, the white wall tiles were finished with a blue and yellow floral border tile. It was mismatched, dated and did nothing to help me feel clean, as a bathroom should.

Saving for a renovation, it was important I didn’t waste money on a room that would soon be ripped out, so the aim was to update it with as little cash as possible.

Thanks to a few leftovers, we were able to give this room a brand-new look for less than £80!

Marigolds on – the first step is proper prep

I started by giving everything a really deep scrub. I used sugar soap and a non-scratch pan scourer on the tiles and The Pink Stuff paste on the taps, bath and shower tray. However, the limescale was so thick in the base of the shower tray, I needed something stronger. HG Industrial Limescale Remover started working almost instantly, and I used a wire pan scourer to help coax off the really stubborn bits. By the time I’d finished, the shower tray had turned from brown to off-white. A marked improvement!

I gave the wood surfaces a quick rub down with a sheet of sandpaper, nothing major, just to create a key in the surface of the varnish for the paint to stick to.

What leftover paint can I use in a bathroom?

I had a few tins of paint left over from the last house that I’d brought with us during the move, including just over half a 2.5L tin of Dulux Quick Dry Eggshell in brilliant white. I used this on all the woodwork, starting with the ceiling and working my way down. For a temporary fix, with leftovers, it did the job!

I also had around half a tin of Dulux Easycare Bathroom paint in Rock Salt, an off-white in our last house, but in here more of a cool pale-grey. The walls needed a couple of coats to cover the blue.

As an area that often gets wet and experiences a lot of use, I knew I needed to cover the primed wood bath and sink surrounds with a hard wearing paint. I had best-part of a large tin of Colourtrend Eggshell paint in Spring Tide left over from the hallway woodwork in our old house which I decided to use. This paint is such a joy to use, it goes on like a dream and is excellent quality. The colour is also really versatile and such a gorgeous shade of grey-green. It seems to work well in period houses; it’s calm and grown up but still feels modern.

One of the more expensive purchases for the update was a tin of Ronseal One Coat white tile paint. At £21 for a small tin, it isn’t cheap but a little goes a long way. I used it to paint over the floral feature tiles that stretched around the middle of the room. It needed a few coats as it was quite a strong pattern, and while it can cover the colour, it can’t smooth over the pattern in the surface of a tile. So while tile paint works best on smooth tiles, and the swirls in the surface of our border tiles are still visible if you look close, it still made a huge difference to the overall look of our bathroom.

Due to drying times in between coats, this step took the longest, so if you’re doing this at home, I’d recommend starting it first if you can.

The easiest and most affordable way to update a bathroom floor

Now I could really see the new-look bathroom coming together. The colour on the woodwork made a huge difference. But there was still the small matter of the dark and dirty cork floor.

I’d heard Dunelm had launched a new range of self-adhesive vinyl floor tiles and after looking around, they were the cheapest I could find that still looked good. I went for the Stellar pattern as it was fresh and neutral and not too busy. I bought more than I needed with the intention of also doing the separate loo next door. In total I used around three boxes (with 10 tiles in each) but opened more to find tiles with the closest matching pattern.

TIP: Buy a couple of extra boxes than what you need (you can return what you don’t open) and lay out your tiles on a larger floor area first in order to best match up the pattern. There are some variations and just by tessellating tiles, you may find the pattern matches far more seamlessly, giving you a neater, more professional finish.

Tools you’ll need for the job: steel ruler, Stanley knife, angle ruler or sliding bevel (if you have angles), something to cut onto.

I laid all the whole tiles first, making sure the floor was completely free of any lose bits before peeling off the backing and sticking down the tile. I’d read reviews that some people had trouble getting their tiles to stick, so I had a spray adhesive on hand but had no issues so didn’t use it.

Confession: I’m impatient and not the best with angles, so I pulled in Liam to do the edging cuts for our oddly shaped bathroom. He loves this stuff so after I’d lined up which tiles I wanted to go where, I left him to it, nipping back in to stick the tiles down once they were the right shape and size. If you have a square bathroom like most people do – this will not be an issue!

Now the bathroom tiles were all white, they looked so much better, however let down by the grout that was old, stained and chipped in places. I decided to give grout pens a try. I’d never used them before so took a punt a bought a pack of grey grout pens from Amazon. At £11.99 for six it was worth a try and promised to be a lot easier and less messy than a full re-grout.

It was a slow start as I got to grips with how best to use them and my first attempts in the shower looked as though a three-year old had done it! Clearly the previous grout job in our shower enclosure was a terrible amateur attempt and I was gutted to see the grout pens were highlighting just how bad a job it was. The phrase ‘you can’t polish a turd’ sprung to mind!

Quickly it was becoming one of those jobs I wished I hadn’t started. I persevered and after the first pen nib became frayed and the pen started to run out, I realised each pen came with a spare nib and the spare nib was angled, rather than round-tipped. This was a game changer!

Using the angled nib, I was able to create a sharp straight line between the tiles, going over messy grout and giving the illusion of a far neater job. Angling the nib downwards gave the best results. I ended up cleaning the tiles in the shower and going back over them using my new technique – so much better. Once dried, a second coat with the grout pens made the tiles look really smart.

Bathroom styling with plants and accessories

In just a few days, the bathroom was unrecognisable. Now it just needed accessorising to finish it off. I own lots of plants and cherry picked a few that I know don’t mind steamier environments, as well as those in white and grey pots. As the décor is very neutral, I also picked plants with a bit more pattern and colour in their leaves to add interest.

I already had amber glass bottles for shampoo, conditioner, soap etc, so brought these into the bathroom. They work so well against the green and look much smarter than collections of different branded bottles that no one really wants on show.

I bought a bath caddy a couple of years ago on Amazon and as well as being super useful for long soaks, it also looks great when the bath isn’t in use. It has lifting section for resting a book or iPad on, a section for beauty products and even a slot for holding the base of a wine glass. It looks great in the new-look bathroom, don’t you think?

The few products on show in here were picked for their simple black or white packaging, including the gorgeous-smelling Moss St candle and Tom Ford perfume, as well as Beauty Pie body wash and lotion. 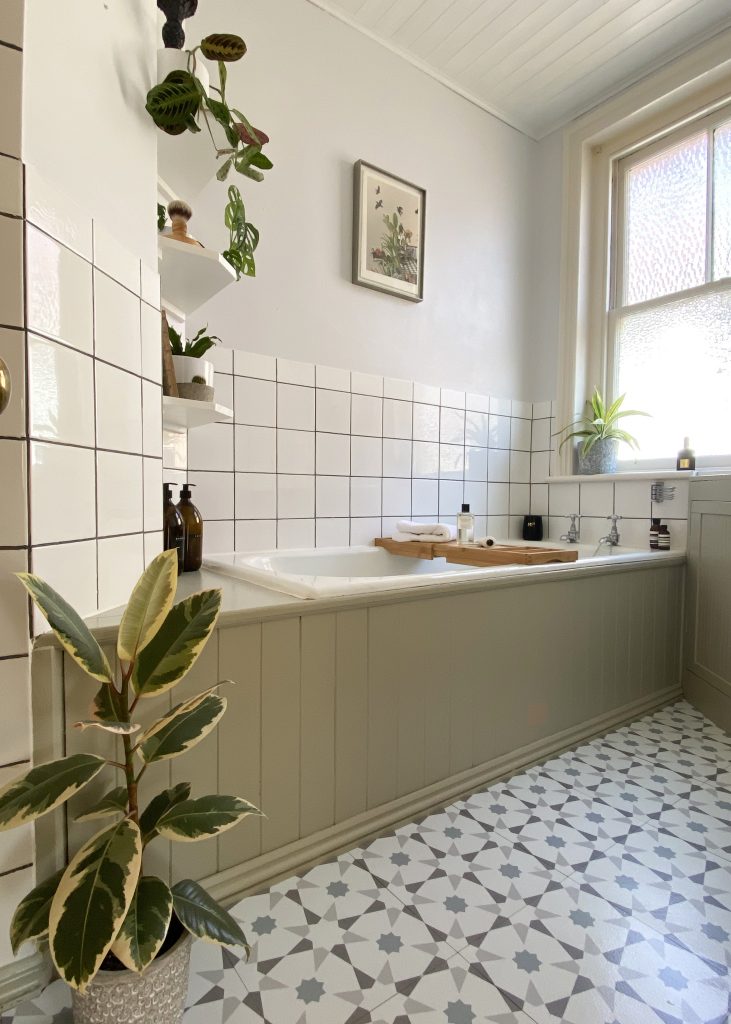 Everything else was either already owned or leftover from previous jobs.

What do you think of this budget transformation? Would you try this at home? For more home renovation updates, follow me on Instagram @brickdustbaby.

Our journey to finding… 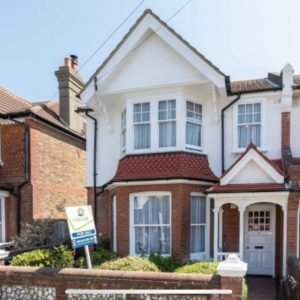 How to create an interior… 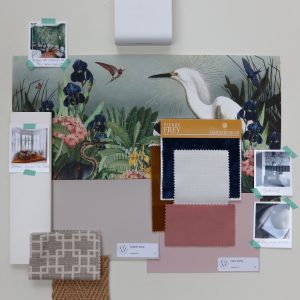